Vocal and instrumental academy devoted to the repertoire of early Baroque. In this second edition the contents of the Academy will be focused on Purcell’s The Fairy Queen, which will be performed in two concerts in the framework of International Festival of Music and Dance of Granada, on July 1st and 2nd.

Those students selected previously to the beginning of the course will take part in the classes, rehearsals as well as will participate in the performances of the work in the framework of the 70 International Festival of Music and Dance of Granada, on July 1st and 2nd.

Moreover, singers will take part in a morning concert on July 4th, in the Monasterio de San Jerónimo, and other concert in the framework of the FEX (Festival’s Extension), in a village close to Granada, on Saturday July 3rd

Professional singers and performers of the indicated instruments. Students of master’s degree in music performance, newly graduates and students in their last years of musical training who want to enrich their musical experience and performance opportunities.

Participants will be preselected by the teaching staff and will have to bring the score perfectly studied, in order during the course to put the final touches on the work. 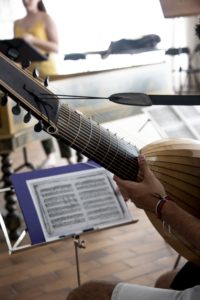 The Fairy Queen, by Henry Purcell (edition by Clifford Bartlett for The Early Music Company Ltd)

Music by Henry Purcell, with anonimous libretto from A midsummer’s night dream by William Shakespeare

Dates of celebration, hours and venues

Number of hours of the course

Free activity for the members of the Academy. They will also receive a grant of a maximum amount of 1.000€ for their accommodation and travel expenses. This amount will be of a maximum of 300€ for those living in Granada and sorroundings

*Observers will be welcome if the sanitary situation allows it. Places will be covered by order of reception of complete applications, which must include a CV

Those interested in taking part in the Academy are kindly requested to indicate in their application form, a link (YouTube or similar) to a video with good sound and image quality, including the performance of 2 or 3 works from the European Baroque, with or without accompaniment, and a duration of at least 5 minutes.

Singers will also have to send a video (full body) reciting the text available on this link, form A midsummer night’s dream by W. Shakespeare.

This course counts on the collaboration of

Listen to us on Spotify: